Shares in well-established, well-capitalized and well-recognized companies that trade for high prices are commonly referred to as blue chip stocks. There are no universally accepted criteria for exactly what constitute a blue chip stock, so one investor may not necessity agree with another. 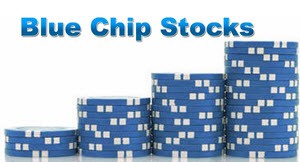 Blue chip stocks are popular among investors that aim for low-risk and long-term investments. They can for instance be used to form a low risk base in your portfolio, before you start adding more high-risk shares or other financial instruments.

Examples of blue chip stock companies based in the United States

If you are interested in investing in blue chip stocks you can for instance take a look at the companies on which the Dow Jones Industrial Average index is based. These are all companies based in the United States, and they are all very dominant in their respective fields.

Of the blue chip companies above, all are listed in the New York Stock Exchange (NYSE) except for Apple, Intel, Microsoft and Cisco Systems. These four companies are traded on NASDAQ instead. 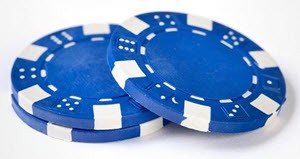 Examples of blue chip stock companies based in the United Kingdom

If you want to get ideas for potential blue chip investments in the United Kingdom, the Financial Times Stock Exchange (FTSE) 100 Index is a good place to start. This index consists of the 100 most highly capitalized UK companies listed on the London Stock Exchange.

The term blue chip stock dates back to the early 1920’s. According to Dow Jones lore, Oliver Gingold was watching the stock ticker at a brokerage firm with Lucien Hooper. At the ticker, some of the shares were selling for over $200 and Gingold told Hooper that he wanted to go back to the office and write “about this blue chip stocks”. The blue poker chip was traditionally the most highly valued at the poker table.

Today, selling for a high value isn’t enough for a stock to be considered blue chip. Most investors will only use the term for shares from well-capitalized, well-established and well-recognized companies with a high share price. Normally, blue chip companies are household names and sell well-known products or services.

Comments Off on Blue chip stocks